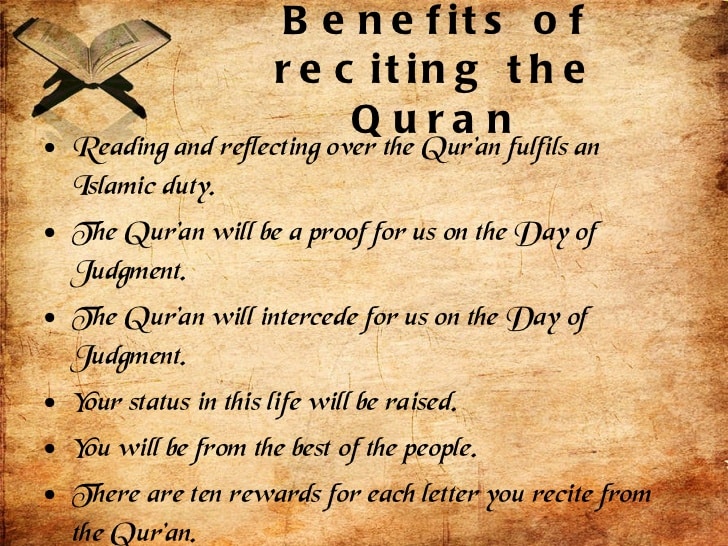 Quran is the 4th and last sacred Holy Book of Almighty Allah. Quran is the Book of guidance for whole mankind. It was revealed on our beloved Prophet (SAW) who is the last Prophet of Allah Almighty. Quran is the Divine book towards which Muslims turn when there is any problem because Quran has the solution to every problem and it is guidance for every aspect of life.

Allah Almighty said about Quran: “This is the Book (the Quran), whereof there is no doubt, guidance to those who are Al-Muttaqoon [the pious]” (Quran, 2:2)

Indeed the Book of Allah is not a book like any other, it is the timeless Speech of Allah, not a created thing, and the study guide for life and death and what comes after. Therefore it deserves a more careful study than anyone else’s speech. So, as a Muslim, we should recite Quran daily with better understanding so that we can earn Allah’s blessings in this life and the hereafter.

Rewards of Reciting the Quran

The rewards of reciting the Quran are many. In another Hadith, our beloved Prophet (SAW) said: “Verily the one who recites the Quran beautifully, smoothly, and precisely, he will be in the company of the noble and obedient angels. And as for the one who recites with difficulty, stammering or stumbling through its verses, then he will have TWICE that reward.” (Sahih Al-Bukhari). So from this hadith, we can say that a person will get the double reward that is trying hard and doing extra effort to learn and recite Quran for pleasing Allah Almighty. We should try to get hard for reciting Quran in this way Allah will be pleased with us and we will get great rewards in this life and the hereafter.

Benefits and Virtues of Reciting the Quran

Let us look some of the benefits of reciting the Quran on daily basis with understanding so that we can get closer to the majestic words of Almighty Allah. Each benefit acts as enough encouragement to Muslims that they should recite Quran daily with understanding. A Muslim gets to know about the real purpose behind the revelation of Quran it should not like that when a Muslim is in some difficult situation then open the Quran and recite it. This purpose of Quran revelation is mentioned in Quran in the following way: “A Book (the Quran) which We have sent down to you, full of blessings that they may ponder over its Verses, and that men of understanding may receive admonition.” (Quran, 38:29)

It is clear from above verse that the purpose of Quran is to bring blessings to a person and it brings about the spirit of monitoring in the readers. Therefore, if one does not read Quran on daily bases, he or she is actually missing a chance of getting inspiration to examine all the things Allah has created and all the matters of life. Therefore, in order to gain religious reward, a Muslim needs to recite Quran on regularly every day.

Daily recitation of Quran brings reward from Allah; it can also bring other benefits in the form of the cleansing of the heart, a chance of communication with Allah and thus becoming a better Muslim every day. The Holy Quran is a highly admired Book of Allah (SWT) that requires proper understanding.